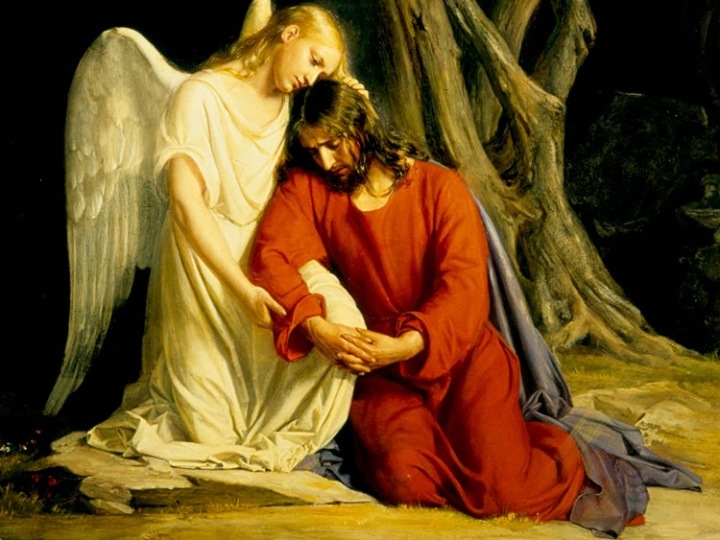 Where/what was the Mountain of Olives? The Mount of Olives was located just to the east of Jerusalem. Jesus particularly went up to the southwest slope to Gethsemane, which means “oil press”. Jesus went up to pray here because he knew that his hour had come. The hour that he knew that he was about to lay down the single greatest sacrifice in all of human history. Jesus took with him Peter, James, and John. The three main leaders of the disciples. He took these three for a important reason. In verse 34 of the 14th chapter of Mark’s Gospel, Jesus tells them that “My soul is crushed with grief to the point of death. Stay here and keep watch over me”. Jesus asked them to pray that they would not fall into temptation, because he knew that he would soon be leaving them. Jesus also knew that they would need extra strength to face the temptations ahead- temptations to turn and run or to deny their relationship with him. They were ultimately about to see their friend, their teacher, die a horrible and gruesome death. Would they still believe he was the Messiah after he died? But honestly, the disciples’ strongest temptation would be
to think that they had been deceived. Also, if Jesus Christ had to pray during a time of temptation, how much more do we need to pray? He was tempted in all aspects of life just like us, only He never sinned. Jesus drew on the Fathers protection and power in this time of need. After this Jesus walks on a few paces more and drops to his knees and starts to pray: “Abba, Father, everything is possible for you. Please take this cup of suffering away from me. Yet I want your will to be done, not mine” (Mk. 14:36). While
praying, Jesus was aware of what doing the Father’s will would cost him. He knew what was about to happen, and He truly did not want to have to go through it, but Jesus prayed, “Yet I want your will to be done, not mine” (MK. 14:36). Anything worth truly having has a price. What does our commitment to God cost us? We must be willing to give everything that we have, to gain what is priceless- eternal life.  If you look in Luke’s account of the Agony in the Garden, Luke states that a angel came down to
give Christ strength. And in ch 22 verse 44, “He prayed more fervently and he was in such agony of spirit that his sweat fell to the ground like great drops of blood”. Jesus was in so much agony and under so much stress that an angel from Heaven had to come and give him strength, and his sweat turned to blood. The medical name for sweating blood is called Hematidrosis. The cause of Hematidrosis is the bursting of capillaries, which feeds blood to the sweat glands. The sweat glands then begin to ooze blood. This condition can be brought on by extreme stress or anguish. Luke’s account is the only one of the four Gospels to include the fact that Jesus sweat turned into blood. Jesus was in extreme agony, but he did not give up or give in. Even though the stress almost killed him, He continued on with the mission that was laid out before him by the Father. Then Jesus came down to the disciples after his near death encounter to find the disciples asleep. Jesus tells Peter to “Keep watch and pray, so that you will not give into temptation. For the spirit is willing, but the flesh is weak” (Mk. 14:38). Jesus used Peter’s drowsiness to warn him about the kinds of temptations he would soon face. The way to overcome temptation is to keep alert and pray. Keeping alert means being aware of the possibilities of temptations, being sensitive to the subtleties, and spiritually equipped to fight it. Because temptations strikes where we weakest and more prone to fall. We can’t resist temptation on our own, and we don’t have too. Prayer is a very useful, even essential, because God’s strength makes up our defenses and is the ultimate way for us to defeat Satan.